According to the US Department of Justice (DoJ), Lafarge is the first corporation to be charged with providing support and resources to foreign terrorist organisations. But it is unlikely to be the last.

Compliance experts say many organisations conduct inadequate due diligence on firms they do business with, exposing themselves to grave CTF risks.

US authorities prosecuted Lafarge and levied an eye-watering penalty of nearly $778 million for making payments to the terrorist organisations, Islamic State of Iraq and al-Sham (ISIS) and al-Nusrah Front (ANF), via a cement plant in Syria.

The Lafarge story came to light in 2016 when former employees brought a case against the firm, instigating a long-running series of legal cases in France. Lafarge was subsequently purchased by another company, which instructed lawyers to investigate.

The case has now been prosecuted in the US because Lafarge used the US banking system to make some of the terrorist payments. This shows how widely US authorities aim to assert jurisdiction, with wide-ranging implications for compliance professionals worldwide.

The reach of the justice department is long

Speaking to the Financial Times, deputy attorney general Lisa Monaco said: ‘This sends the clear message to all companies, especially those operating in high-risk environments, to invest in robust compliance programmes, pay vigilant attention to national security compliance risks, and conduct careful due diligence in mergers and acquisitions.’

Companies are operating in such high-risk environments more than ever. ‘The reach of the justice department is long,’ said Monaco, adding that the DoJ will scrutinise deals, mergers and acquisitions and companies’ due diligence in such circumstances.

Lafarge was charged with making nearly $6 million in payments, some disguised as ‘donations’, to ISIS and Al-Nusrah to ensure continued operations. But it also sought to profit from the deal and made around $70 million in additional revenue from it.

US attorney Breon Peace said: “In the midst of a civil war, Lafarge made the unthinkable choice to put money into the hands of ISIS, one of the world’s most barbaric terrorist organisations. Lafarge did this in exchange for permission to operate its cement plant and leveraged its relationship with ISIS to hurt Lafarge’s competition.”

Federal Bureau of Investigation deputy director Paul Abbate said: “This guilty plea is a result of extraordinary collaboration between the FBI, DoJ, and our international partners. It demonstrates to anyone who would contribute to terrorist activities, the FBI will relentlessly pursue, and hold them accountable, regardless of where, or how, they attempt to hide.”

The implications for CTF compliance

The case highlights the need for all organisations to ensure they implement robust CTF compliance processes at all times.

Jonah Anderson, partner at legal firm White & Case, said anti-money-laundering (AML) and CTF are often mentioned together. But Lafarge’s prosecution is a timely reminder that terrorist financing is a distinct issue.

“Due diligence on intermediaries and acquisition targets must be thorough and not happen in a vacuum – in this case, the continued profitability of Lafarge’s subsidiary at a time when others were finding it difficult to operate in that environment was a red flag,” said Anderson.

Too manage the risk more thoroughly, firms could include a dedicated terrorist financing component in due diligence. This should expressly address the issue in any share purchase agreement, particularly if the target operates in an area where terrorist organisations also operate. In the Lafarge case, the geo-political risk in Syria should have been a key part of that assessment.

Dev Odedra, AML expert at Minerva Stratagem Consulting, said: “This case highlights the importance of conducting thorough due diligence, no matter how large the corporation, especially when it operates directly or through subsidiaries or intermediaries in high-risk jurisdictions.”

“I have seen, first-hand, that too many banks get a false sense of comfort when conducting due diligence on large corporations, such as those listed on stock exchanges. They think it means they can do no wrong, leading to reduced or even no due diligence. Lafarge may appear unique, but it might not be the last organisation to be caught in such a position.”

One challenge is that organisations tend to focus compliance efforts, including monitoring tools and training, more on AML than CTF risks. This often because money laundering can be larger in scale and terrorist financing can be far harder to spot. But there are solutions available that can identify terrorist financing activity effectively. Combined with robust training, this can make a difference.

But it is also important to note that when employing technology, any screening solution is only as good as the underlying data that serves to power the processes designed to protect your business from risk.

Jamilia Parry, global head of innovation and digital solutions at PA Consulting, said: “Establishing a holistic view of all parties involved with appropriate screening and due diligence is fundamental to understanding potential terrorist financing risks.”

“Firms also need ongoing holistic monitoring by using internal data, such as payments; and external data, such as watchlists and adverse news screening. This can help identify changing patterns and potential hubs and networks for further investigation.”

How RiskScreen can help with both AML and CTF compliance

RiskScreen provides comprehensive, award-winning screening technology to help you boost your AML and CTF compliance processes. Our smart, flexible, risk-based solutions configure to your way of working, and scale with you through organic growth and acquisition.

They include KYC (know your customer) due diligence on individuals, including company directors and shareholders; plus know your business (KYB) screening using data from kompany and Sayari, which cover corporate entities worldwide. RiskScreen also provides broad and deep adverse media screening.

Contact us to discuss your challenges and find out how RiskScreen can help you combat financial crime. 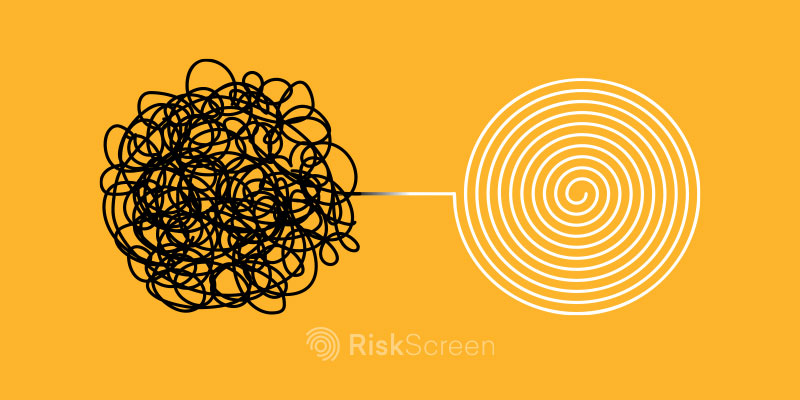 Customer and supplier onboarding is challenging at the best of times, but onboarding corporate, fund and trust entities is especially difficult due to the complex nature of underlying business structures.